Dr. Kreutz discusses biomarkers and family dynamics as they relate to group singing. 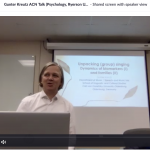 Understanding group singing in older adults from a biopsychosocial perspective.

Many older adults face formidable challenges to social wellbeing. Foremost among these is the social isolation and loneliness that may arise from a combination of factors inclusive of retirement from work, increased physical distance from family, and the death of loved ones. Another prominent challenge to social wellbeing concerns stigma, often involving self-stereotyping whereby an individual internalizes commonly held negative characterizations of aging or aging-associated diseases as part of their social identity. SingWell Canada (https://www.singwell.ca) is a SSHRC-funded partnership development grant that aims to investigate the potential for choir singing to support social wellbeing in older adults living with age-associated diseases (Parkinson’s, Lung Disease, Dementia, Aphasia, Hearing Loss) as well as those who are in good health. We are currently tracking 15 newly formed choirs across Canada. A second aim of this project is to clarify the sociobiological underpinnings of any benefits to social wellbeing. Our results at the year-1 mark of this program of research suggest that group singing leads to increased social connectedness and reduced stigma. Pre-post session effects typically show increases in oxytocin and pain thresholds, and decreases in cortisol. Comparisons with control conditions suggest that some of these pre-post effects are driven by singing alone, while others arise as a function of group dynamics.

Many older adults face formidable challenges to social and psychological wellbeing. Recent research by our group and others has demonstrated that group singing may be an effective way to ameliorate some of these challenges faced by older adults. In particular, group singing appears to positively impact wellbeing by elevating mood, reducing stress, and increasing social connectivity. In the current study, we tested older adults in group and private singing conditions to determine to what extent benefits are contingent on singing as a group. The study also sought to provide some preliminary evidence for two potential sociobiological underpinnings for these effects, namely cortisol and oxytocin. This study uncovered several important findings: group singing indeed elevated levels of social connectivity and mood, whereas private singing did not influence these measures. Importantly, although both group and individual singing led to decreases in cortisol, only group singing led to increases in oxytocin.These findings suggest that effects of group singing on mood elevation are group dependent and are likely influenced by changes in oxytocin. The data presented here are part of the SingWell project, an international research study exploring the potential for group singing to support psychosocial wellbeing in older adults.

The effects of group singing on pain threshold and beta-endorphins in older adults with and without Parkinson’s disease.

Social well-being is often compromised in older adults due to a confluence of factors. These include so- cial isolation and loneliness, which can arise from retirement, separation from family, cessation of driving, and the death of loved ones. Social isolation and loneliness are especially prevalent in those diagnosed with age-related diseases, such as Parkinson’s. Over the past decade, numerous research groups have found support for the idea that synchronous movement, such as that which occurs in group singing, may foster social bonding. Other studies have found that group singing leads to increases in pain thresholds, even after accounting for analgesic effects associated with cardiovascular activity. Dunbar and colleagues have sug- gested that the increases in pain thresholds may be due to the release of the hormone, beta-endorphin. To the best of our knowledge, this intriguing sociobiological explanation for increases in pain thresholds follow- ing group singing has not yet been tested using hormonal assays. In the current study, we tested analgesic effects of group singing in two groups of older adults. One of the groups is a Parkinson’s choir, and the other is a healthy older adult choir. The research presented here is part of the SingWell project, an international research study investigating group singing in older adults from a biopsychosocial perspective. We con- ducted a pain threshold test using a dolorimeter and obtained a saliva sample immediately before the choir session began and immediately after the choir session ended. Results revealed the expected post-singing increase in pain thresholds for both choirs. Beta-endorphin assays will be used to assess sociobiological explanations of the analgesic effects of group singing.